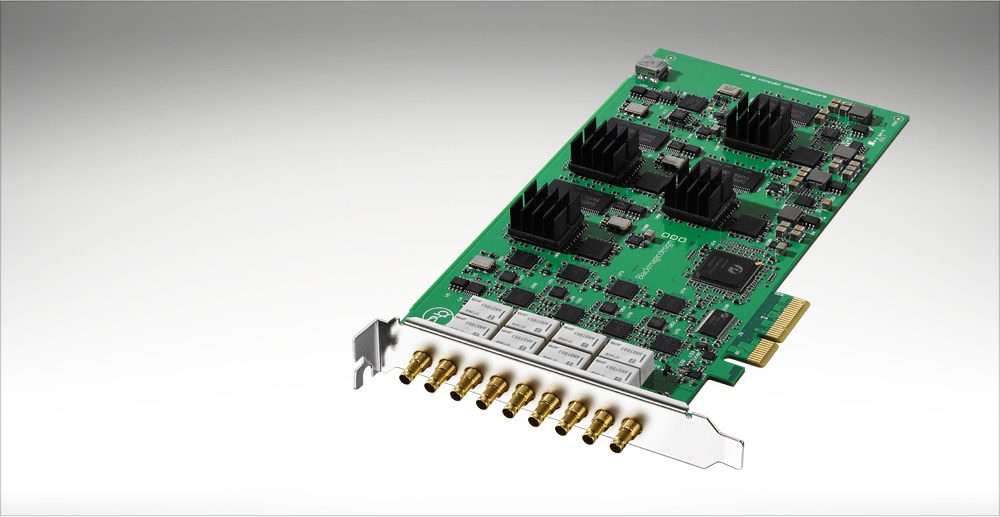 As the founder and owner of Mobeon, a company that specializes in streaming production, I’m always looking for ways to streamline my kit and simplify my workflow to give my client the best stream possible regardless of the venue. At Mobeon we handle a vast range of events events varying from small- to large-scale, and our clients run the gamut from Fortune 100 companies to startups to and non-profit organizations. Drawing on that experience, in this series I’ll explore some of the latest gear for doing mobile and portable streaming production, both HD and scaling up to 4K. You can achieve a lot with minimal resources and still travel lightly when you have jobs across the U.S.

I’ll begin this first installment by describing two software-based streaming solutions that enable you to deliver professional-quality streams from your PC or Mac.

We all know that streaming is a growth industry. The tools have become much more accessible and more portable as the popularity and feasibility of live streaming has grown. There’s a lot more streaming-capable hardware and software out there, and more opportunity than ever for those of us who know how to use it.

At numerous events I’ve captured and streamed with Mobeon, I’ve worked extensively with Telestream’s Wirecast Pro (Figure 1, below), a Mac- and Windows-compatible streaming application now in version 6. It comes in two versions. The Studio version is more of a starter piece of software, which is why we prefer the Pro version. 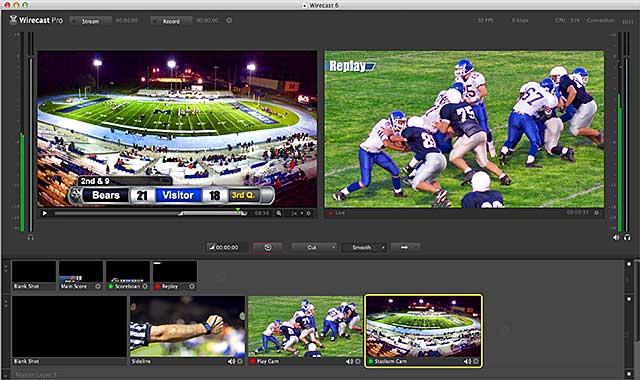 Telestream has introduced some new things in this latest iteration of Wirecast Pro. Now it has a Replay button, which is fantastic because previously this option was limited to higher-end systems such as NewTek’s 3Play. The replay ability allows you to capture and replay some clips from sporting events, allowing you to create some highlights and so forth, which is groundbreaking in a software-only application that runs on your Mac or PC.

Wirecast 6 Pro also features Twitter social media integration. All you have to do is provide your Twitter account and log in, and you can actually select certain tweets that you want presented in your stream. This implementation gives you moderation capabilities so that you can select and choose what you want to appear in the stream itself. Plus, it has other capabilities and functions such as drag-and-drop for playlists, and it’s quite versatile in enabling you go into and configure your ouput for various content delivery networks.

At Mobeon, we’ve use almost all the different hardware and software solutions available, but Wirecast had been a saving grace in a lot of events because of the flexibility it provides for working in changing environments. When your client makes last-minute changes and requests, you’re going to have to be able to accommodate them sometimes, and working in a versatile application like Wirecast makes that easier to do.

Wirecast allows us to stream to most streaming platforms, and serves other purposes as well. It serves as a titling program through its recent integration with NewBlue Titler Pro (Figure 2, below), a plug-in that allows you to add titles on the fly. This is a big step forward from earlier versions in which the titling capabilities were much more limited. Now you can add and alter lower-thirds graphics in mid-stream, so to speak. For many events where titling is of key importance, this is a critical feature. 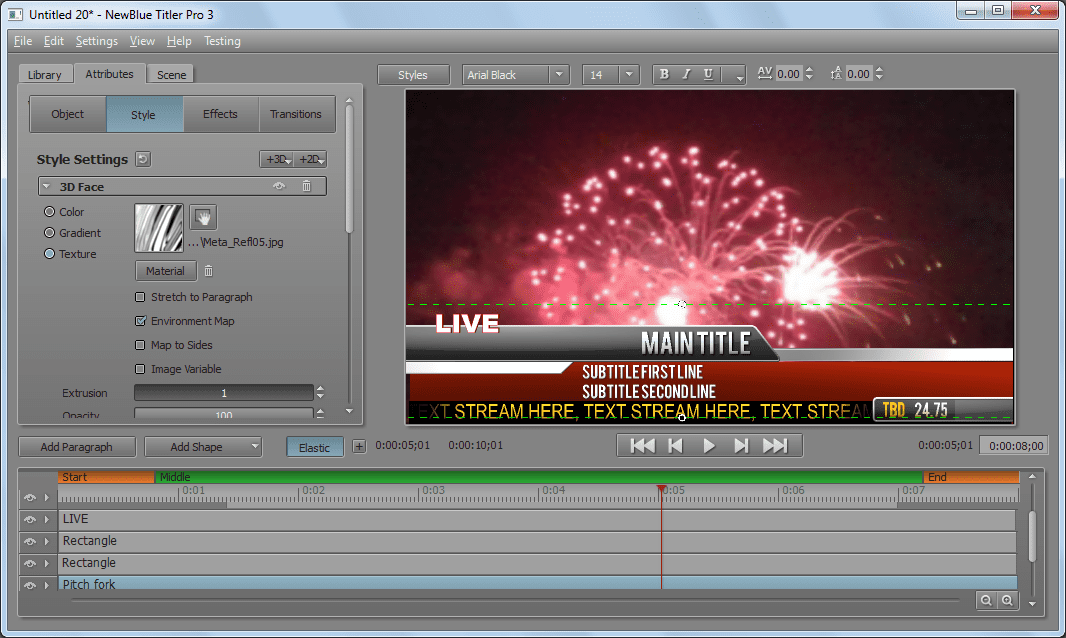 Figure 3 (below) shows a setup with Wirecast Pro based on a MacBook Pro Retina system. This includes three Canon XA25 cameras (see Part 2 of this series for more detail on the XA25) mixed in with the Blackmagic Ultra Studio recorders. This allows you to have a three-camera input switching system with the MacBook Pro Retina. 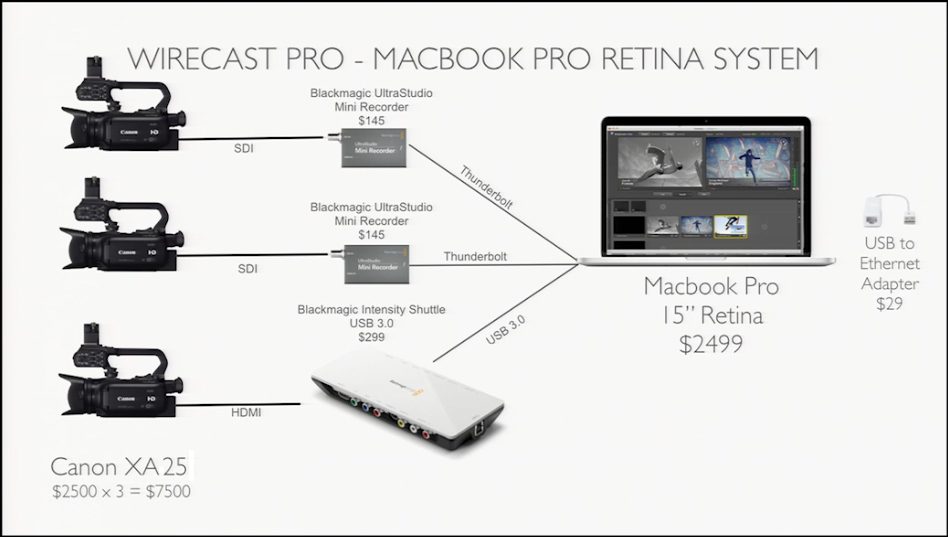 To make this system work, you need to get a USB-to-Ethernet adapter since the MacBook Pro Retinas don’t have an Ethernet connection, and the number one rule of streaming is that you must always have a hardline connection to the Internet, and you should never rely on anything wireless or WiFi.

This is a great portable unit. You can almost fit in your backpack, and that’s ultimately what we’d like to create: The ability to put both your camera and switching systems in a bag and jump on a plane and be off to the races to stream for your event. We’ve actually used these in certain critical situations where we didn’t have the time or the the manpower to do a larger-scale production. We were able to put this system together, transport it to the event, and deploy it with much success.

Figure 4 (below) shows the CalDigit Thunderbolt Station, a compact unit that allows you to expand the inputs of a Mac laptop. That’s something that I do recommend getting because of the fact that it adds additional USB ports. It doesn’t add any extra Thunderbolt ports because, again, due to the restrictions of Thunderbolt, unfortunately, it doesn’t allow it. It does add another HDMI output to the Mac laptop, and it’s something I would highly recommend in getting and adding to your kit as well.

Figure 4. The CalDigit Thunderbolt Station. Click the image to see it at full size.

Another excellent option for software-based live production and streaming is vMix, which is available in an HD version for $320 and a 4K version for $630 (Figure 5, below). 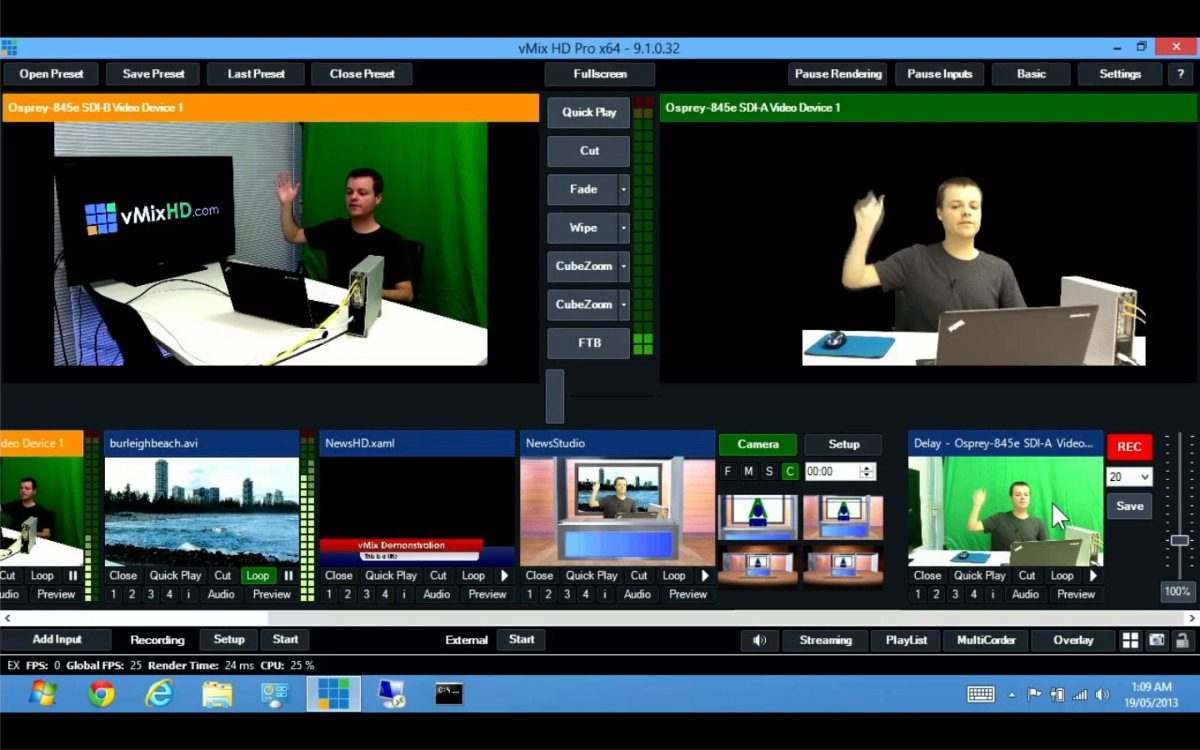 vMix is very capable. Its 4K support has become increasingly importance as bandwidth grows, 4K-capable cameras move into the mainstream, and Netflix and others bring 4K streaming to consumers. We have some clients that are now requesting 4K, and vMix 4K helps us to deliver it when we need it.

I’ll focus on two four-input capture cards used in the various streaming systems we employ. One of them is the Matrox VS4 (Figure 6, below). The Matrox VS4 provides four-channel HD-SDI inputs and is compatible with both the Wirecast and vMix software. In addition, Matrox has introduced a software app called Pro Recorder that allows you to record 4 individual ISOs and save them in various bit rates to archive some of the footage you’re capturing at a multi-camera switched shoot if you need archived versions of the individual camera streams. 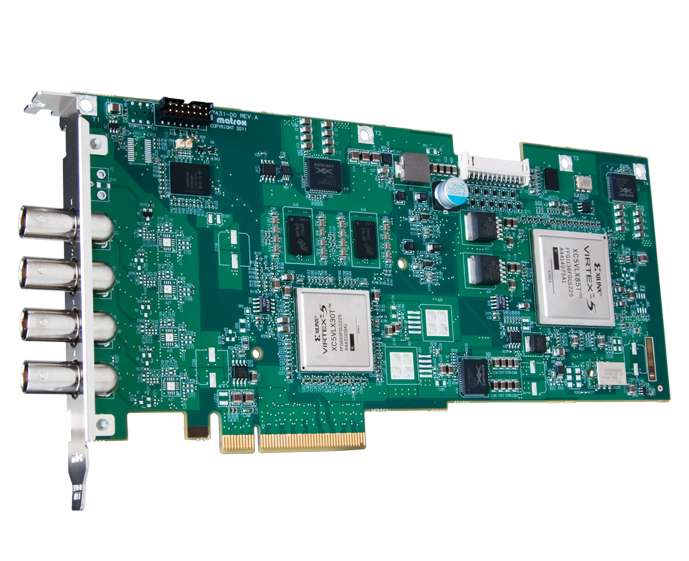 Figure 6. The Matrox VS4

Another card we use is the Blackmagic DeckLink Quad (Figure 7, below). Unlike the PC-only VS4, the DeckLink Quad is both Mac and PC-compatible. It can’t record ISOs like the VS4, but it functions fantastically as a switcher and also has various other capabilities that are adequate for streaming.

Those are the two cards I recommend in building your own streaming system, or as built-in components of various pre-built streaming solutions. When purchasing a streaming system, be sure to consider whether or not the functionality of the card it incorporates serves your purpose.

Converter boxes are one of the better-kept secrets in the streaming world, but you will at some point discover that you can’t get through a shoot without one. The biggest and most common challenges that streaming producers face are Internet and bandwidth issues. But a close second are scaling issues you encounter when recording and streaming presentations presentations. Presenters generally tend to want to bring their own laptops to deliver their Powerpoints at a corporate or conference event. You don’t know what they’re going to be feeding you; it might be VGA, or it might S-VHS or some other ancient technology. Whatever the source, you’ll need to scale it immediately to get it into your stream, and for this you’ll need a versatile converter box.

Fortunately, The Roland VC1-SC up-down cross-scan converter (Figure 8, below) has been a lifesaver for us at some events. It can take various inputs from 3G, HD-SDI, HDMI, and composite sources. It can handle pretty much anything you throw at it. It allows you to take that feed and convert it to a compatible signal to bring into your switcher. I highly recommend looking into the VC1-SC because it can handle various inputs and give you the output that you need. 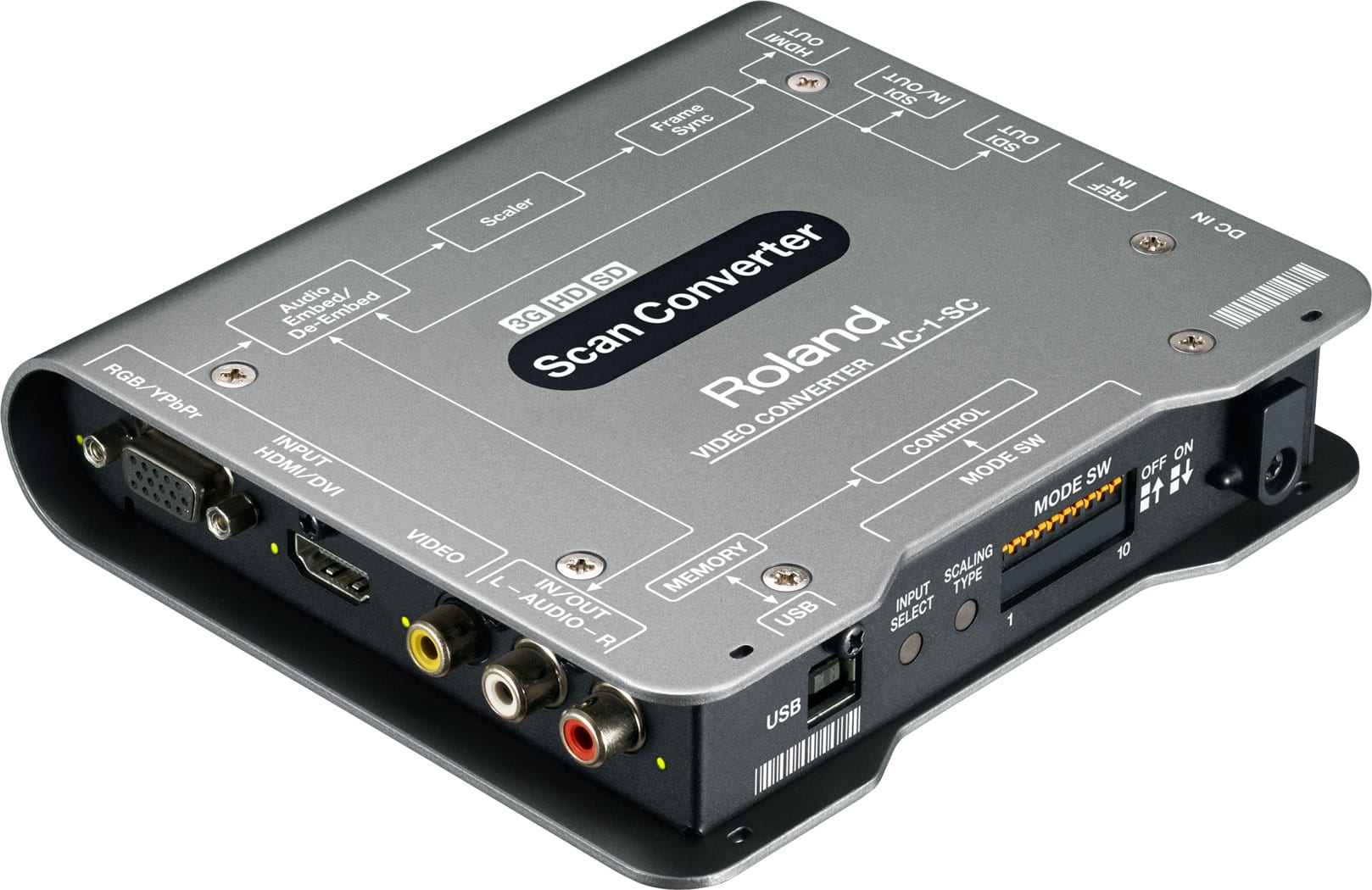 Another option is Blackmagic Design’s HDMI-to-SDI Mini-Converter (Figure 9, below). Blackmagic also offers SDI-to-HDMI converters. It’s good to have a variety of converters in your bag because you never know what type of input you’ll have to deal with on a given day. 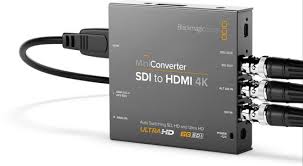 There are some drawbacks to the Blackmagic converters. In my experience, they can be very finicky in the type of signal that you’re sending to it and getting from it. Blackmagic tends to like 1080i 59.94.

Atomos, best-known for field recorder/monitors like the Ninja and Samurai, offers two converters: the Connect S2H (Figure 10, below), which converts HD-SDI to HDMI; and the Connect H2S, converts HDMI to HD-SDI. They function like the other converter boxes discussed above, but the great thing about the Atomos units is that they’re battery-powered, and they’re also quite versatile in the different scan rates they support. They’re also very compact; as illustrated in Figure 7, they can fit them in the palm of your hand. (The Blackmagic converters can also run on batteries but they’re not as compact as the Atomos models.) Both Atomos converters run on both battery and AC power. 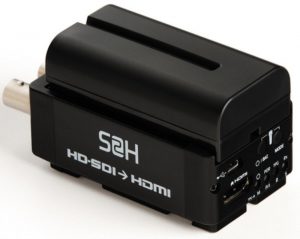 Again, one particular converter may not work for you when you’re on location. So I recommend buying multiple converters. They’re all relatively small and somewhat inexpensive, but they can save your entire stream at crunch time.
In Part 2 of this series, we’ll look at cameras for HD and 4K production.