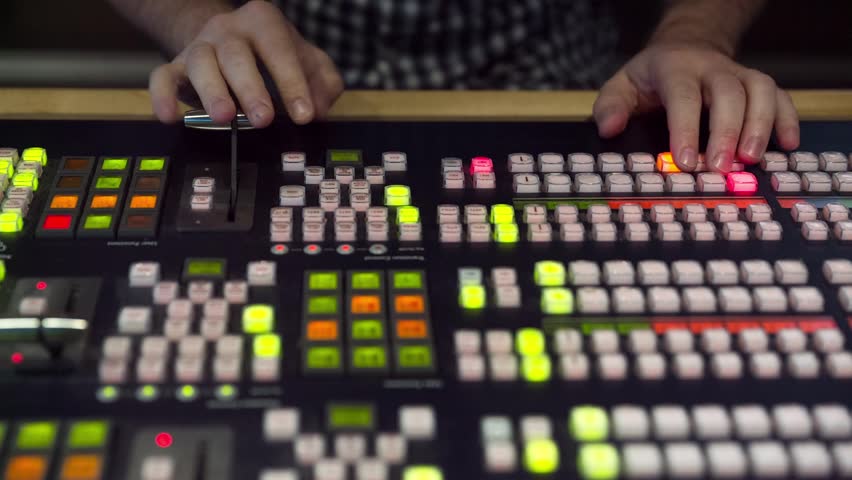 To kick off Part 3 of this series on streamlining your traveling streaming kit, we’ll look at some switching options. In Part 1, we looked at software-based switching you can do within your laptop with our discussion of the MacBook Retina-based streaming system (using Telestream Wirecast Pro) that has worked for Mobeon on a number of projects. Here we’ll look at hardware switchers that are compact and versatile enough to meet your needs as you build a streaming system that can travel with you from event to event.

Blackmagic Design has been producing high-quality switching equipment for years. I’m a fan of the ATEM Production Studio (Figure 1, below). The prices range from $1,695 to $3,995, depending on how many inputs the switcher has. Blackmagic offers a full range of different products that will serve your needs specifically in switching.

At Mobeon we use the ATEM Production Studio as a hardware switcher, and then we run the signal through another vMix or Wirecast encoder on a Mac Mini. The ATEM Production Studio does have graphic overlay capabilities, but we tend to use other pieces of software that allow you to overlay graphics and replay video and so forth. Overall, the ATEM units are highly functional and reliable, and compact enough to fit in a mini-flight case as we travel to events.

As I mentioned in previous installments, my goal is to be able to stream high-quality productions using gear that can fit in a backpack. One of the newest entries that helps us move in that direction is the NewTek TriCaster Mini HD4 (Figure 2, below). 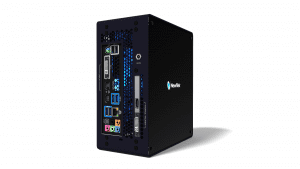 Unlike other TriCaster models–which are themselves quite compact for the functionality they offer–the Mini does, in fact, fit in a backpack. As you can see in this demo, you can set this unit up in 5 minutes.

One of the challenges of doing live productions is the prep/setup time required. With any event, it’s a race for time to make sure that you’re going to be able to stream at the designated stream time.

The TriCaster mini looks like a fantastic portable streaming solution. One potential drawback is that it takes HDMI inputs. As I mentioned before, you see a GoPro being used, but it seems pretty formidable as a portable streaming system. But given NewTek’s reputation in live streaming equipment, it’s something you should highly consider.

Another unit for portable streaming that we’ve used quite often at Mobeon is the 1Beyond Stream Machine (Figure 3, below). This “lunchbox” unit comes configured with the Matrox VS4 with four SDI inputs, plus pop-out RAID cartridges in the front, internal hard drives, and an SSD drive. 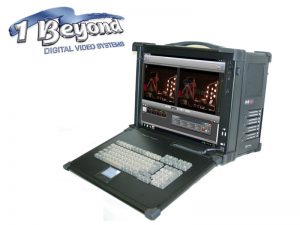 Figure 3. The 1Beyond Stream Machine

We’ve hand-carried this unit to events without having to pack it into any luggage. We set it up, connect it to some cameras, and we’re off. Because it uses the Matrox VS4, as discussed in Part 1, the Stream Machine is very versatile because, again, in addition to providing switching and streaming capabilities, it has ISO recording capabilities. Sometimes we have clients that just want ISOs for the event, and we use the Stream Machine to record the various streams independently at high quality. It’s portable, and it serves multiple purposes, and for those reasons it’s in arsenal of streaming tools that we use.

We’ve also used the Paladin Live Streaming Solutions (Figure 4, below) for specific types of events with much success. The Paladin is quite compact and quite capable as well. It uses the Blackmagic DeckLink Quad (described in Part 1), which enables it to take four video inputs, although it does not do any ISO recording like the VS4-based 1Beyond models. If you’re just doing streams, the Paladin is a great unit to work with.

Paladin also offers a more inclusive flypack package (reviewed here) including monitors, compact cameras, and a plastic carry case that are worth looking into as well.

Mobeon has also produced successful event streams using the Roland VR-50HD (Figure 5, below). True to its “all-in-one” billing, this unit can handle just about anything that you throw at it. It takes HD-SDI. It takes RGB and HDMI. It has a scaler built in. It also has an audio mixer as well. It has a touchscreen, so you don’t necessarily have to bring a monitor with you when you’re taking it to events. Also, the touch interface is just quite versatile. You can do a lot of events with it. 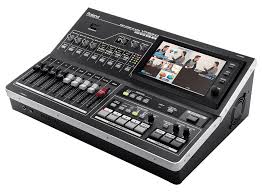 One thing the VR-50HD doesn’t have is a streaming encoder. Again, my go-to encoder in most situations is the Mac Mini. Basically, we interface the VR-50HD with the Mac Mini and we have a versatile streaming system. We used the Roland VR-50HDs to switch all the sessions at Streaming Media West 2014.
The late-2012 Mac Mini (Figure 6, below) is my go-to encoding system, with Wirecast installed, because it has a quad-core chip. Apple cut the newer models at the knees by putting only dual-core chips into the newer models. Also the processors in the post-2012 models aren’t up to par streaming capability, and they’re not expandable.

If you can find a late-2012 Mac Mini, I recommend purchasing it for your streaming kit. Get the highest processing speed you can–I recommend 2.6gHz and above, quad-core, with maximum RAM. We stream 1080p out of our Mac Minis with no problems. We run these units nonstop, 24/7, for weeks at a time.

Another device that I recommend adding to your kit is the Teradek Cube (Figure 7, below). They’ve proven to be rock-solid video encoders for events where we’ve used them. The minor drawback to these units is setup time. Depending on how your event is structured and how much prep time you have on site, you may find that you don’t have enough time to configure these units via software that you have to download through a computer. Also, you may have to configure it for a particular CDN, or for some events you’ll have to go in make those changes manually. 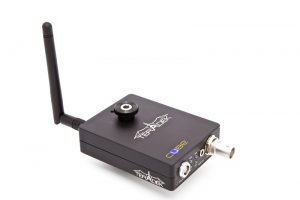 Teradek also offers the VidiU (Figure 8, below), which makes it possible to stream an event without a hardwired Ethernet connection. The VidiU connects via HDMI, and you can configure it with a single 4GLTE card and stream to various platforms like Livestream, Ustream, RTMP, and so forth. 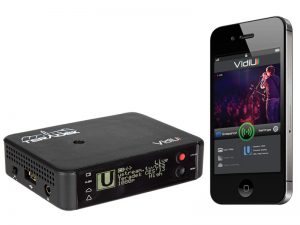 Another solution Teradek offers is the Bond (Figure 9, below), which combines the encoder and the bonding equipment in a single box. This allows you to take 6 USB cell modems and connect them, and then also bond that to send to another server. Generally, this interface is what they call a Sputnik server, and from there on it streams out to a CDN. It combines all the different 4G connections and provides a single solution to stream from. 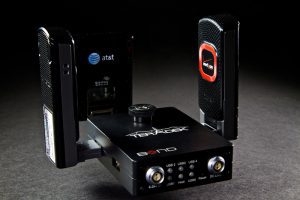 Though the Bond has worked well for us in some situations, there are some drawbacks. In a lot of instances the cell reception that you’re relying on to stream isn’t that great. Also, anything that’s wireless or cellular-based is prone to interference, and that’s something that you have to mitigate and be aware of before you stream at an event. That said, most of the time these Teradek solutions are rock-solid performers, especially in those situations where you don’t have the Internet connection.

A final thing you want to consider with these small, portable units, is finding a way to monitor them. I recommend the MMT Monitor2Go FHD HDMI portal monitors for portable production (Figure 10, below). These monitors interface with your iPads, but they take an HDMI input. Other models on the market offer USB input, but there is some lag on the screen. Using HDMI gives you high resolution with minimal lag. You can fold the Monitor2Go flat, and run it on battery power if needed. This is a great choice for portability as well. 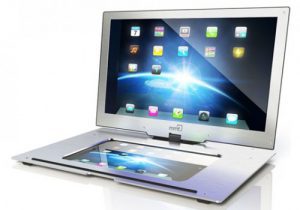 For a larger monitor, I recommend the 23″ Acer H236HL (Figure 11, below). I’ve tested all the Acer models in this line. They include a variety of inputs, among them VGA, DVI, and HDMI. It comes with the stand shown in Figure 11, but you can remove the stand without a screwdriver and use it flat. Even though these are bigger than the Monitor2Go models, they’re great for portable productions.

To wrap up, with the exception of the just-released NewTek TriCaster Mini, what I’ve presented in this series are the various portable production components that my company uses to capture and stream events. You’ll need to figure out what works for you and what doesn’t, and mix and match as required. I recommend that you put together a kit that you can use on call so that, when you get hired to shoot and stream events at the last minute, you’ll still be able to take the job and deliver a high-quality production. The gear described here should also enable you to do that at a relatively low cost, because most of the equipment discussed here sells for under $10,000, including cameras, switchers, and so forth.

Based on the success that we’ve had with this equipment, I believe you can’t go wrong with anything discussed in this article when putting together a solution that works for you for your business. That said, it’s also important to keep an open mind and be flexible when putting together a streaming solution. When dealing with different clients and venues, you have to make sure that you get all the details before the event and look at all the things that the client is requesting to make sure you can deliver what they need. This will enable you to provide rock-solid streams with minimal headaches and establish a good reputation in this industry.